Whilst there they were able to do some sightseeing and also attended an open air musical - 1776 - this is a musical based on the events surrounding the signing of the Declaration of Independence.

H.L. Wendy did her job as Supreme Truth well and was also Flag Bearer for the Uncrowning Ceremony - Grand Royal Matron Judy was Flag Bearer in the Coronation Ceremony and H.L. Heather gave the Tribute to the Australian Flag. Our wish for you is a New Year filled that is filled with good health and happiness and may your hopes and dreams be fulfilled.We look forward to a year full of hope and friendship and may we continue to grow and reach out and bring others into our 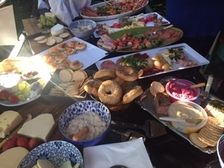